It getting hot out there and that means finding different ways to beat the heat. Since I live in North Carolina my husband has banned the beach this year. If you haven’t heard North Carolina beaches have had a small shark problem this year, like only 8 or so shark attacks in the last few weeks. Then there is that whole man of war thing. We like our kids. We would rather they didn’t become shark snacks. Since the beach is out for now that then leaves good ole swimming pools and various bodies of freshwater. So far this summer my family has been exploring local bodies of freshwater. We went camping at Jordan Lake which only made my husband want a boat. I’m not sure that trip to the lake was a good idea. A couple weeks later we finally had an adventure and my husband and I had the opportunity to float the Cape Fear River. Floating a river is something we had talked about doing since we lived in El Paso. There you could go and float a section of the Rio Grande that was in New Mexico. Then I have classmates from high school that are always floating at Rainbow River in Florida. There must be something to this floating thing and my husband and I were going to find out.

We floated the Cape Fear River, had a good time and as usual a bit of an adventure also! We definitely learned a few things that will help make trips in the future even better. Check out my 10 tips for a river float trip!

1. Check the weather. You not only want to make sure you are going to have good weather for your trip but if your area has had rain, especially a lot you will want to check that river levels are safe for your float trip. This is where the adventure in our trip came into play. Our trip was suppose to last about 5 hours and it lasted just under 2! Why? We had heavy rains the day before and the river was rising and the current was very strong. The group I was with was the only group that went down the day I went because conditions turned dangerous. We had several floaters that missed the take out spot. Heck, my husband and I missed the first take out spot despite his swimming and my paddling.

2. Wear Sunscreen. I think this one is simple, wear sunscreen and reapply. Sunburn sucks.

3. Protect your feet Wear water shoes, sandals or a pair of five fingers. There is no telling what is on the river bottom. Plus you will need something to wear to walk down to the river and then once you are done. I chose an old pair of my minimal running shoes. They are my go to shoes for mud runs and things like this.

4.Leave valuables at home. Don’t bring anything you are not afraid to lose. If something falls into the river it is typically gone for good. It doesn’t care if it is your favorite sunglasses. My oldest son has a pair of eyeglasses at the bottom of Elephant Butte Lake in New Mexico… That was a lesson he and my husband learned fast.

5. Ziploc Bags. Ziplock bags are your friend. They are perfect for storing your phone and valuables such as car keys and copies of your ID and some cash.

7. Bring Beverages and not just the alcoholic kind. You need to stay hydrated during your float trip so be sure to bring some water and other drinks. If you choose to bring alcohol, first and foremost drink responsibly. Bring cans over bottles as glass is just dangerous in this situation.

8. Bring snacks. You are going to be out on the water for a bit and your bound to get hungry so bring some snacks. Just be mindful of what you bring. Things can easily get wet and you will be left with soggy food. You also want to be mindful of the trash you are bringing. Fruit, nuts and beef jerky are all great options.

9. Bring a cooler.  If you are bringing food and drinks you are going to need somewhere to put everything. Just stay away from Styrofoam coolers as they have a tendency to fall apart and are banned in many areas.. Most places offer a float with a bottom for a small fee.

10. Carabiners and Rope. Some places offer rope or have rope around their floats but not all do. Having rope around your float and adding a carabiner allows you to hang things off of your float. The rope is also useful to attach your cooler float and other floats together.

There you go my 10 Tips for a River Float Trip! So listen to your river guide for instructions, wear your life vest (because safety first!) and have fun!

When my husband and I lived in the Fayetteville area during our first round at Fort Bragg we never went to downtown Fayetteville outside of the day we were married and to pick up our boy’s birth certificates. Back then we were always told to avoid the area. I can remember hearing about how they were trying to revitalize the area and every now and then I would hear about something that was going on. After being away eight years things have changed and I can safely say that staying away from downtown is NOT advice anyone should take. Downtown Fayetteville is full of places to explore, eat and shop! It is an area of Fayetteville I am still exploring so I was disappointed I missed part of the adventure my fellow bloggers went on during the Fayetteville Familiarization Tour. Luckily though I was able to check out the Dogwood Festival and Fourth Friday with them and check out some areas I really need to go back and explore!

Fourth Friday has been held in some way or form for the last about 15 years. Every Fourth Friday of the month part of downtown is closed where you can walk on the streets. There are exhibits, all sorts of free entertainment as well as food and drinks that come to together in historic downtown Fayetteville. It is a very  relaxed and fun atmosphere.

On the Friday that we went we first came across a set up by the Climbing Place, where you could climb and race to the top of the rock wall. It was busy and we watched as father’s raced their children up the rock wall to see who would be first.

Next we came across the Fayettevillains. Check out the great video that Angela from Mommy PR took of them HERE

and finally we reached the Market House where Air Born Aerials was set up. Here is some video that I took:

They were amazing! Aerial silks have always amazed me.

Simply the upper body  and core strength that is needed to do this amazes me!

I learned afterwards that there was even an exhibit inside of Market House. Honestly there is so much to do it is very easy to miss things with everything going on.

Just exploring I was making a mental list of all the places that I needed to come back to and visit. Fourth Friday was definitely a good way to get out and explore downtown Fayetteville!

In addition to Fourth Friday the Dogwood Festival was going on. The Dogwood Festival has been around since the early 80’s. Much like Raleigh is the city of oaks Fayetteville is the city of dogwood’s, giving the festival it’s name. The festival which is held every 4th weekend in April, hosts local and national music artists, arts and crafts,plenty of food and of course fun! Friday night’s featured artist was country singer,Craig Campbell.

As part of the blogger familiarization tour we were given the VIP treatment and hung out at the VIP tent but not without first walking the red carpet.

I have to say that red carpet sure can make a girl feel special. 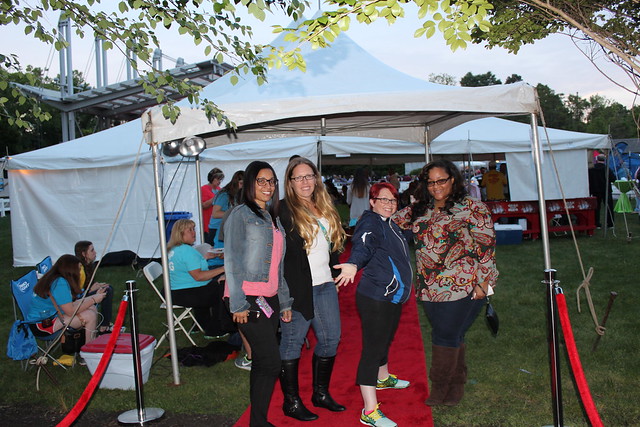 We were able to sit back and relax while waiting on the night’s headliner. 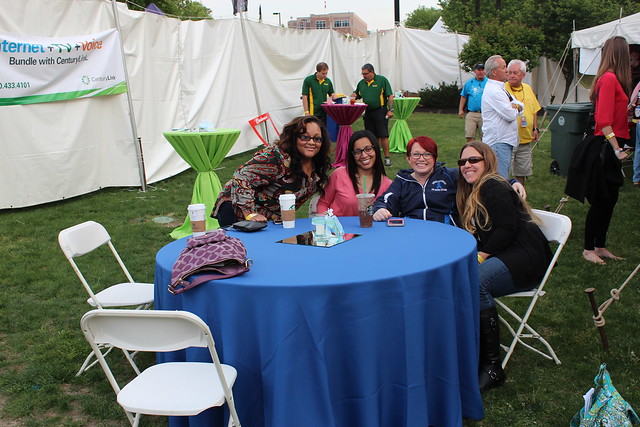 While remaining close but somewhat far away from the stage

There are concert’s at Festival Park several times throughout the year and  having been in the VIP section before I can say  the set up varies. I was happy to find this up close video of the flash mob the Fayetteville Police did. Their video is much better than the one I posted on instagram so here it is:

While in the VIP area they served a buffet dinner from Hilltop House, another great local restaurant that serves contemporary southern food. One of the best buffets I have had since I became gluten free. The tiny potatoes I had were my favorites!

Here is what everyone else ate:

The food was great!

All that was left was to wait on Craig Campbell’s  who eventually came out after 9:30. He started off his set with Brooks and Dunn’s, Play Something Country and the crowd loved it! His concert closed out an eventful day.

Are you interested in Fourth Friday and want to check it out?

Check out their page HERE

Make sure this account has posts available on instagram.com.