It’s been a month since my last half marathon and I wasn’t sure about writing a recap but here it is, my recap of the All American Marathon’s Mike to Mike Half Marathon! My dilemma with writing was because I didn’t actually run the half marathon because I was pacing but I still did the course so why not?

This year was the second running of the All American Marathon but the first year of it’s expo. It was a small two day expo with plenty of room to grow in the future. On Saturday, I was there volunteering with Team Red, White and Blue. Other booths there included The Runner Spot (a local running store), Bondi Bands, another NC based running store, USAA, UCAN nutrition,  US ARMY and ROTC programs along with a couple others.

Saturday late afternoon was also when their pasta dinner was held under a tent outside at the expo.  As a pacer I was invited along with a guest. Their guest speaker this year was Ivan Castro, a wonderful wounded warrior who has done many amazing things since his injury to include running the All American Marathon the previous year. Oh and did I mention that he is blind. Amazing stuff right there!
Being gluten free I didn’t really get to enjoy the full pasta dinner but I have been told the pasta, garlic bread and cookies were good. I can vouch for the vegetables though.  They had some fried broccoli and cauliflower that was mighty tasty in addition to a salad of mixed greens. At the conclusion of the meal they even gave away the centerpieces and I was given a jar full of flowers.

Off to home I went to get ready for the next morning. Even though I  was walking not running, I was quite nervous. I was the sweeper and 4 hour pacer for the half marathon, that is a 18:20 mile. Not a 4 minute mile that some people thought when they saw my sign. Can you imagine being that fast?!?

I trained though. I went from running to walking and rucking. I rucked with a weighted ruck to help slow me down. I was as ready as I was going to be for the next day.

Sunday morning for the first time ever my husband dropped me off for the marathon. Nervous about traffic we got there nice and early. Another option for runners was to catch a shuttle ride from Fort Bragg to the race start. There was also an opportunity for shuttle rides from the finish to the start line area. Runners who took the shuttles rode the same buses that they use to transport soldiers, white bluebird buses. If you don’t know what they are they are simply school buses that are white not yellow. The buses were there (all at the same time) at approximately 6:30am giving plenty of time for bag check, pre-race photos, and getting to the start line. There were no corrals but you could find a pacer and figure out what area you should be in.

After listening to the Star Spangled Banner we were off with a loud bang in true military fashion. 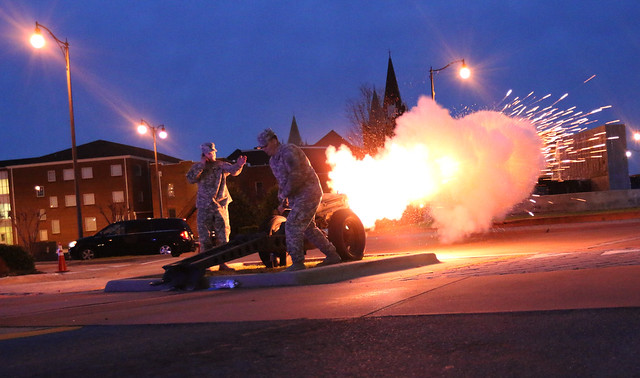 As a pacer and a sweeper I needed to determine how best to pace those in the back of the pack. I chose to go their pace as long as we were under 18:20. That way if they needed to take breaks we could. For the first mile or so I walked with the 7 hour pacer for the full. When he pulled ahead I was left with several ladies, two of which  I stayed with for the entire half marathon.

For the first couple miles we were in downtown Fayetteville and went by the Airborne and Special Operations Museum area  after that it  was to the Haymount area and the dreaded Haymount hill. I was walking and had trained on a hilly route so Haymount Hill wasn’t that bad in my opinion. If I was running though i’m sure it would have been a different story. I know my bicycle escort had issues and the ladies I was pacing were ready to be done with the hills. We then traveled down Morganton road and eventually made it to the All American Highway. By the point we were making it through the marathon route the spectators were sparse, something to think of if you are a back of the pack runner. A huge thank you to those who waited for us before packing up it was appreciated!  Another issue we came across as those in the back of the pack were barricades being moved before we had crossed the street and watching water stations dump water as we approached. The water tables still had water but I had to come to a complete stop when I needed it. There were also some snacks (trail mix and gu’s) and although I brought my own gels I would grab something  just in case those I was pacing needed something. One thing that I was able to easily do as the sweeper was say Thank you to every police person, medic, support table volunteer and soldier on the course. They are critical pieces to good races.

Once we got on the highway it was nice and flat but a bit boring, it is a highway after all. This isn’t Disney but our mile 8 is truly something special. At Mile 8 Wear Blue: Run to Remember was set up. Every person experiences this mile differently. Some cry, some find new found strength to finish, whatever it is this mile is very moving.  I slowed down during this time and pulled away from those I was pacing to allow them to experience this however they needed.

To give you a glimpse of the Wear Blue: Run to Remember Mile check out this video HERE.

After the Wear Blue Mile we came upon Fort Bragg and at mile 10 we walked up an on ramp (well it was an exit ramp if you want to be picky) we were at the full and half marathon split. We took the right to finish the half marathon. I think at this point those I was pacing must have thought I was crazy. I walked backwards up the ramp and down the road and I even was skipping. For a half marathon I was feeling pretty good.  I may or may not have danced  and sang

When we went by the All American Band playing Shake it Off. Really, who doesn’t sing and dance to Shake it off?

We were coming to the finish though, despite people telling us we were almost there. We knew otherwise.

The mile markers for the race as you can see were nothing fancy but did the trick.

Next thing I knew we were at good ole Iron Mike! The finish was near!

At Iron Mike we were ahead and the ladies I was pacing some stopped and took pics and it was at this point I let them have their much earned finishes on their own.
After receiving my medal from a soldiers in their dress blues and receiving my finisher back pack the ladies found me and took a pic with me to my surprise and thanked me for helping them.

After the race there was a finish line festival but being  in the back of the pack I had missed much of the entertainment. Since my husband was picking me up I found him and we left to go home so he could do homework and things to get ready for work the next day. Well after we stopped in at Lowe’s first. Yes, I went in to Lowe’s medal, race bib and all.

It was honestly one of the best experiences I have had “running” a half marathon. It was an incredible honor to help pace those in the back of the pack! This race is one I would recommend to anyone looking at doing a half marathon. My only big complaint was my pacer shirt. It was too small. We were told they were running really big and asked if we wanted to size down. I said sure. Lesson learned… don’t size down in the future. Maybe that person wears smediums…. ya know shirts that are a size smaller than they should wear. Oh well, I didn’t chafe…and the actual race shirt is very comfy and nice!

Check out THIS video recap of the 2015 All American Marathon. There may or may not be a glimpse of me pacing in there.

Want to run (or walk) the All American Marathon in 2016? Check this out-

It is javelin season! I missed this field! #javeli

Better late than never! I just started my holiday

Who just fed her family Impossible 2 days in a row

Looking for some breakfast and brunch ideas? Check