I did it again! I ran another Half Marathon! So 2 Half Marathons for 2014 so far and my third half  all together. This time I ran the Inaugural Rock N Roll Raleigh Half Marathon.  I had heard good things about the Rock N Roll races and how some considered them better than the Run Disney races. This half marathon was my Christmas present from my husband. So after taking a few days off after the Disney Princess Half I was straight back into training mode. 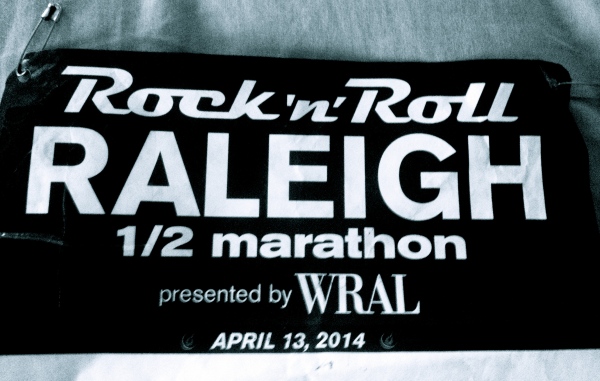 The Rock N Roll Marathon and Half had a expo on Friday, April 11 and Saturday April 12. I ended up going Saturday and brought my younger 2 with me. 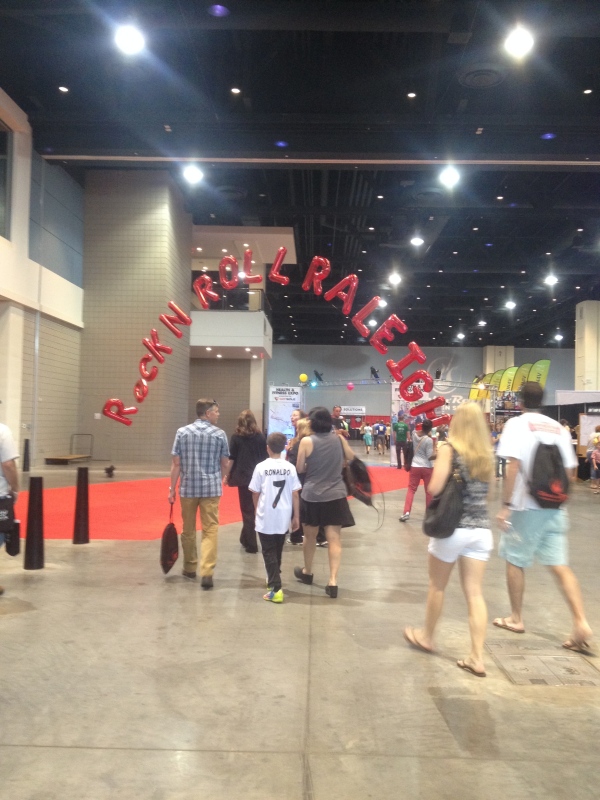 Ballon creations greeted us at the entrance of the expo and people were lined up taking their pictures with them. It was a short trip down the escalator  to the expo floor that we entered by walking under Rock n Roll Raleigh in balloons.

Packet pickup was quick and easy. You first picked up your number and walked around to where the shirts were. Also in this area were people handing out your gear check bag. There were no goodies or treats which was disappointing.

Before walking into the next area I was handed a coupon for Marathonfoto and some Starbucks via.

The next area was a combined area where you could buy race memorabilia and Brooks stuff. Brooks also had their Run Happy Island set up. I got my “passport” and I won a t-shirt. If I had completed all 3 activities I could have won a bag too but my kids were ready to go after doing their kids scavenger hunt and winning frisbees.

We walked around the floor. I bought some bigger water bottles for my fuel belt that I know I will need as the temps and humidity rise this summer. Compared to Disney this expo was small and really didn’t offer anything I was really excited to see or really want to buy. 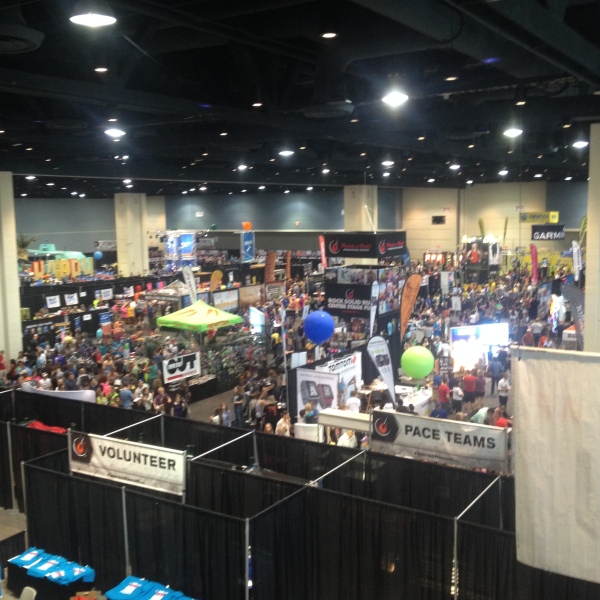 I spent the night at my parents, set my alarms and went to bed. The race was  to start at 7 and you needed your car parked by 6 so I planned to get to downtown Raleigh by 5:30am. My plan did not work as expected though. I should have been pulling into a parking garage at 5:30am but I was stuck in traffic. It took me over an hour to go a half mile. I began seeing more people walking on the side of the road. Even in the car in front of me the driver got out and left for the race and the passenger took over the driving. I was really worried if I was going to make it. Raleigh police eventually shut down the road to one lane and that helped some. I made it to where I was suppose to turn right just as they closed the road for the race. I had to turn left. If I had brought $10 cash there was a lot I could have  used but at the expo we were told the parking would be free so I didn’t bring any cash. So I drove on. Now I use to live in Raleigh, for decent segments of my life.  I even use to work off Wade avenue but it has been 15 years since I have lived and driven in downtown Raleigh. I sadly didn’t remember all the back ways and Siri is of no help in these cases. After driving my second circle around I somehow got lucky and found my way to the 5th floor of a parking garage with not even 5 minutes to the start. No time for any pre race rituals. I just grabbed my things and went. 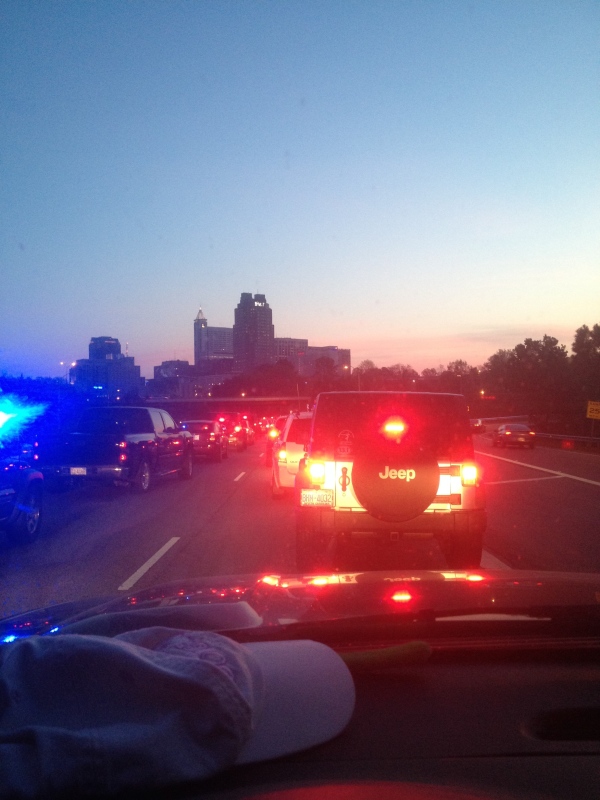 It was after the race I found out that race officials were post updates on the Rock N Roll Marathon Twitter. The race had been delayed by 10 minutes. I can only hope everyone who was trying to get to the race made it! There was an awfully long line of cars behind me that were also waiting.

I ran/walked about a block or so and found my corral. These corrals were not as strict as Disney’s. they were open and anyone could go to whatever corral they wanted. No one was making sure people were in the proper corral. This made for some bobbing and weaving around people as the race started.

I was just happy to be in the corral getting ready to run. While waiting I talked to a few ladies around me that were very kind. This was a huge difference when compared to the Disney race. I ran that race alone as well and not a single person said a word to me. This one was everyone saying good luck to each other and just talking to each other in general. Even if it was to complain about the horrible traffic.

The race started and as the corrals would go we made our way around the block to the start. There were plenty of port potties and you could easily jump out of line and go if needed. Heck you could have grabbed a hot dog off the cart on the corner if you were hungry.

Before I knew it we were off. It was a tough course with a ton of hills and more up hill than downhill. At least it seemed that way. For the first 6 miles I stayed ahead of the 2:45 pace group but someone throwing water on me and the hills slowed me down that mile and I wasn’t able to catch back up to them. I really don’t remember the hills in Raleigh being so steep but they are. I did it though, I finished! Under 3 hours and setting a PR for myself.  Mad at myself for losing the pacer but it was a tough race. In the end finishing matters, not your time.
The course support was just as it was stated it was going to be despite the warm temps and 94% humidity (according to my Garmin). Thankfully I wore my fuel belt but I ended up refilling it at the 10 mile stop. The stops offered cold water and yellow gatorade at each stop and Gu around mile 8. They had flavors other than the ones they said they would be handing out. I got lucky and was given my favorite, Salted Caramel.
The bands along the course weren’t the best and some were better than others. The absolute best was the marching band playing atop a bridge. The worst was a female singer around maybe mile 6 and her tired, slow song. I enjoyed the bystanders that set up and played music more than the bands.  Thankfully I was running with my iPhone and using the one ear piece.
I do have to say the bystanders at the race were great! We were running on Palm Sunday and I was even blessed by a priest as I ran by a church.  There was even a couple who had just gotten married and many great signs and for those who like it, a lot of cowbell. More cowbell than I have ever heard during a race.

I finished strong and running. Knowing I had PR’ed added to the moment and I felt pretty awesome. After I finished we were given our medals and then a cold wet rag which was awesome. Next they were handing out bottles of water, gatorade and chocolate milk. My hands were full! A little further I found food. First there were Power bars but having never tried them I asked if they were gluten free and they didn’t know so I skipped them. Along with the cookies and pizza, again I couldn’t get a clear answer on if they had any that were gluten free. I was then offered a banana  which I passed up thinking I would just grab something from a food truck.
I was starting to cramp a bit in my calves  so I decided it would be best to find my car and go before I completely cramped up.
I was skipping the free cup of Michelob Ultra  (again it isn’t Gluten free) and concert by New Politics. I had never really heard of them anyways.
Overall except for the traffic problems it was a pretty good race. I am interested in maybe trying another Rock n Roll Race. I am just not sure I want to brave another half in Raleigh with it’s killer hills.

So here are my race “goodies”.

and we can’t forget my well earned medal!

It is javelin season! I missed this field! #javeli

Better late than never! I just started my holiday

Who just fed her family Impossible 2 days in a row

Looking for some breakfast and brunch ideas? Check